Our daring and dependable DNA has been passed down for generations. It’s grown in strength, explored every continent, and conquered impossible obstacles. Now it's time for the latest evolution of our fearless legacy. Introducing the all-new 2022 Tundra. Our most powerful, most capable and most advanced body-on-frame truck ever. Arriving December 2021.137 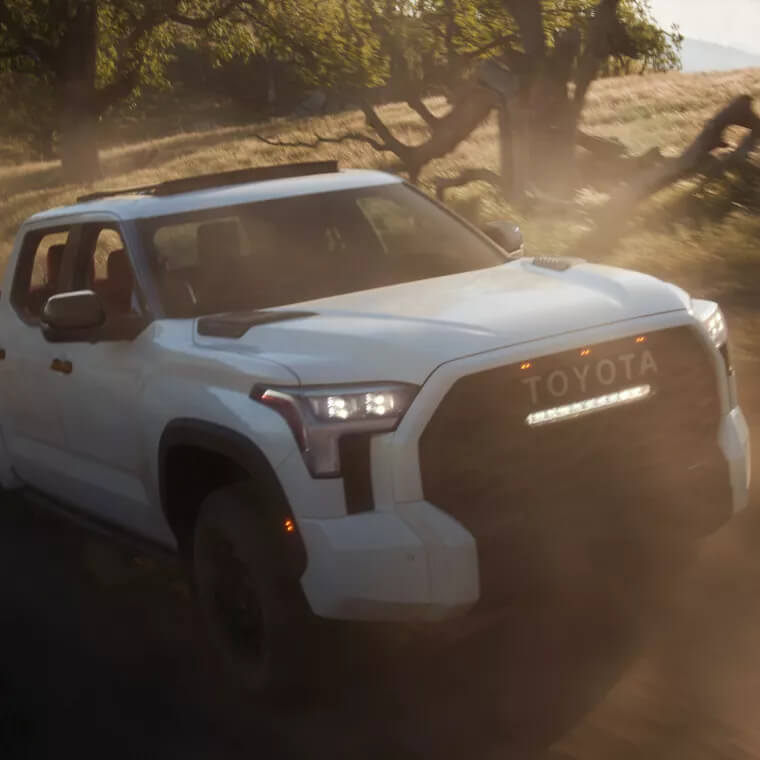 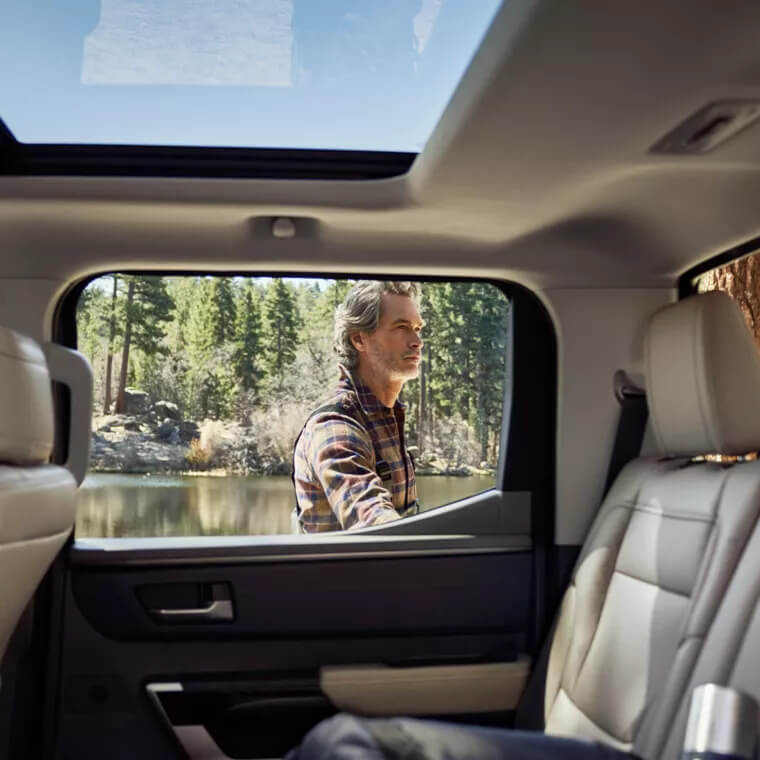 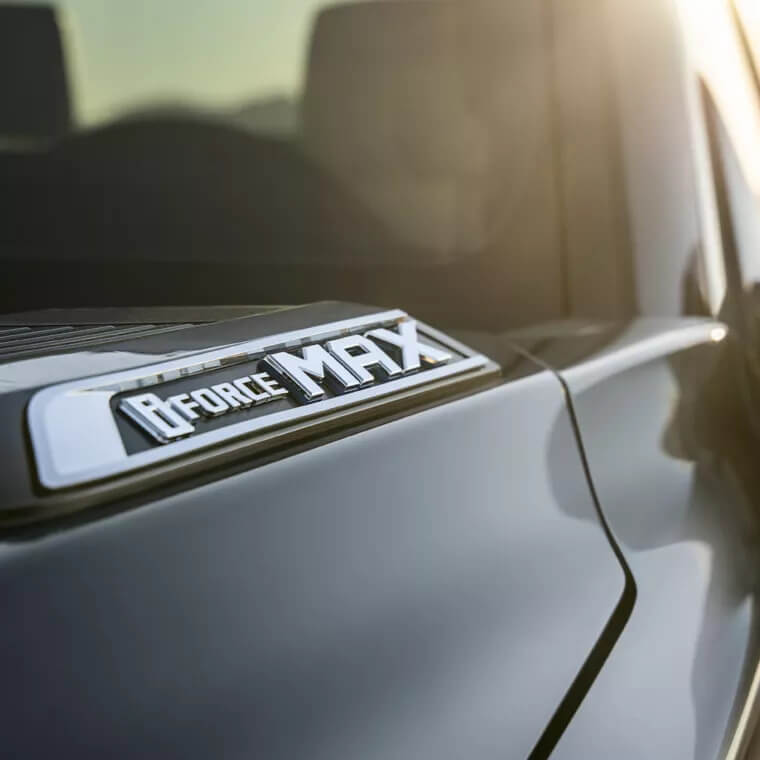 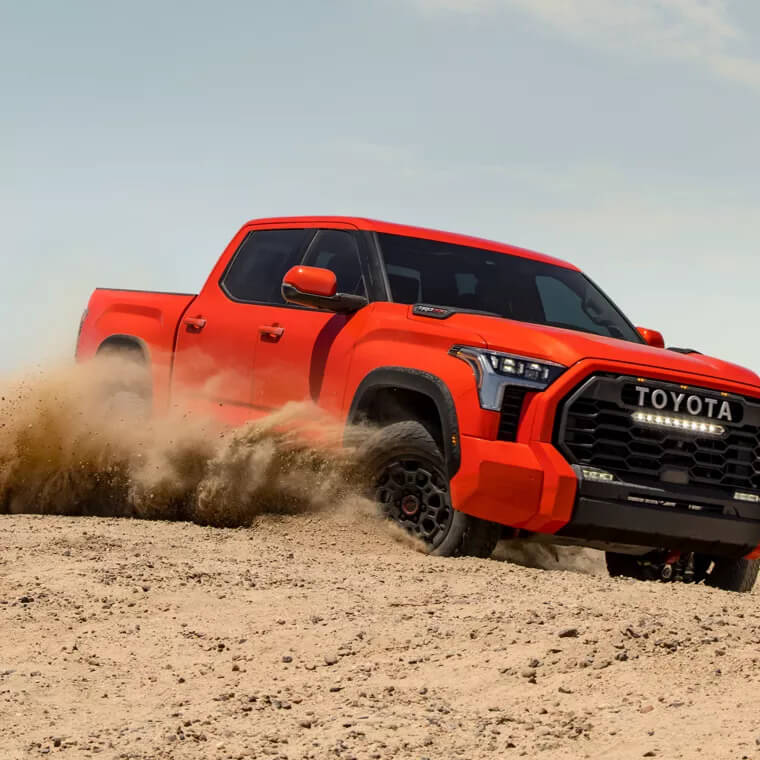 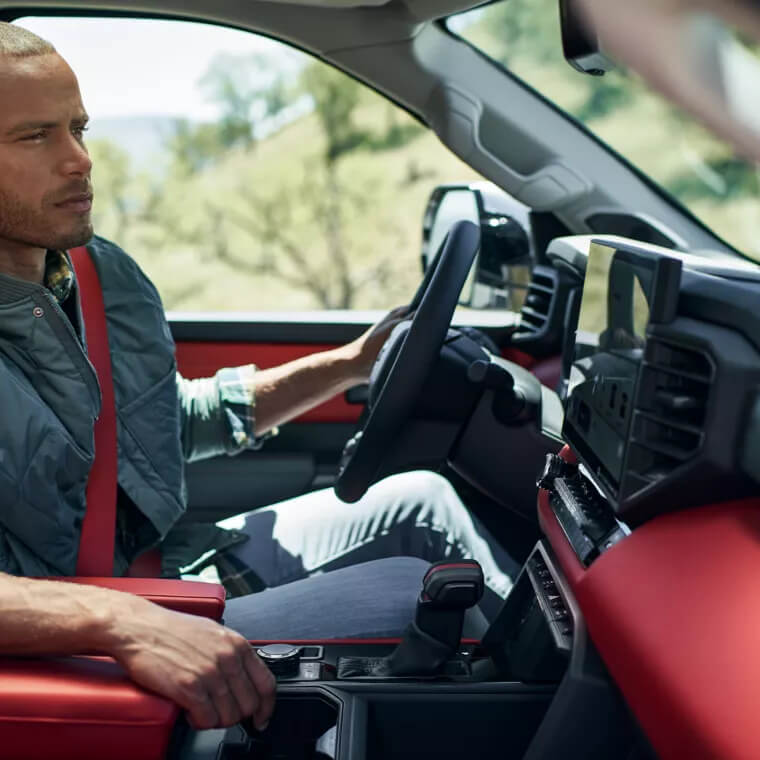 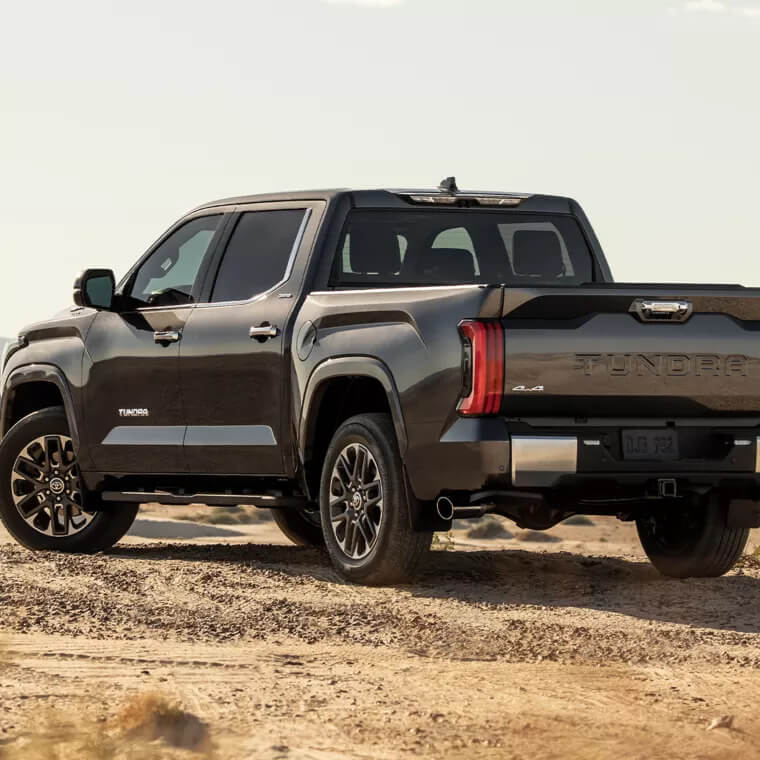 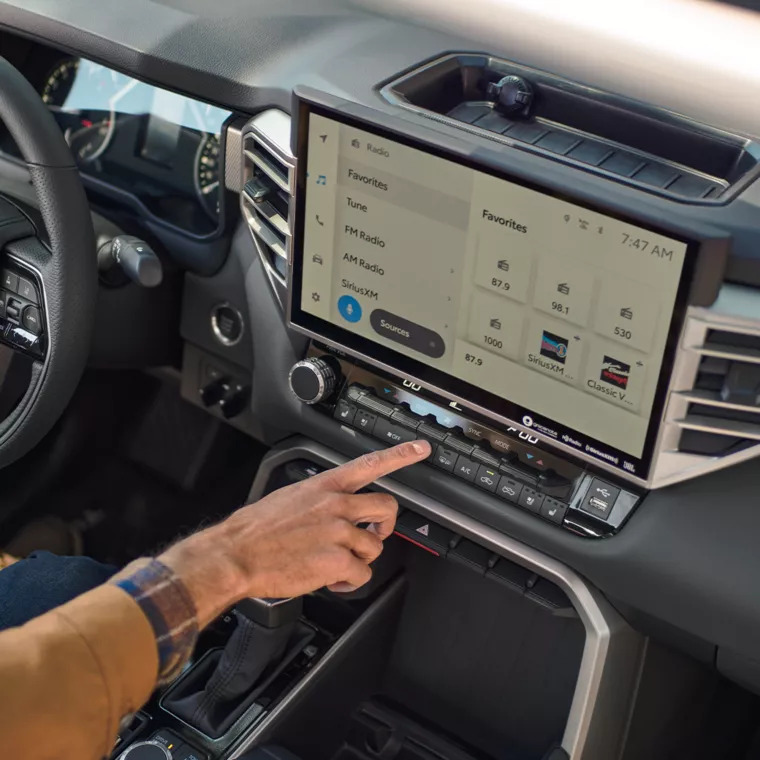 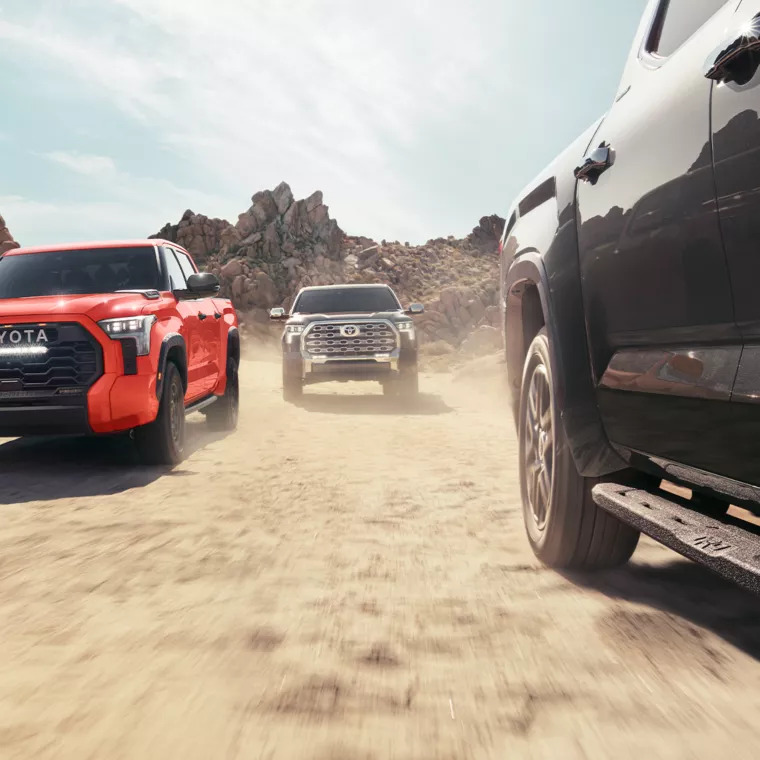 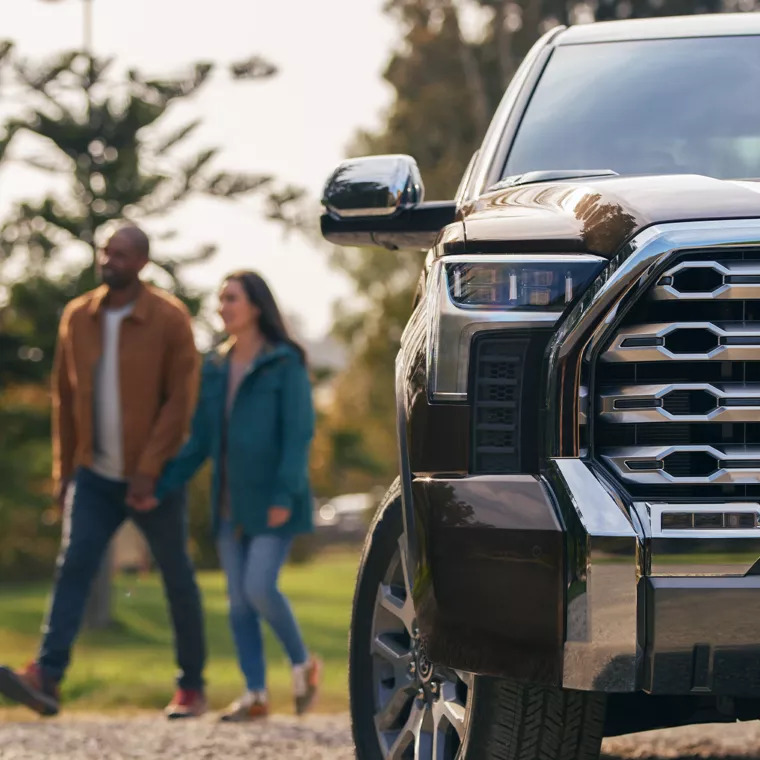 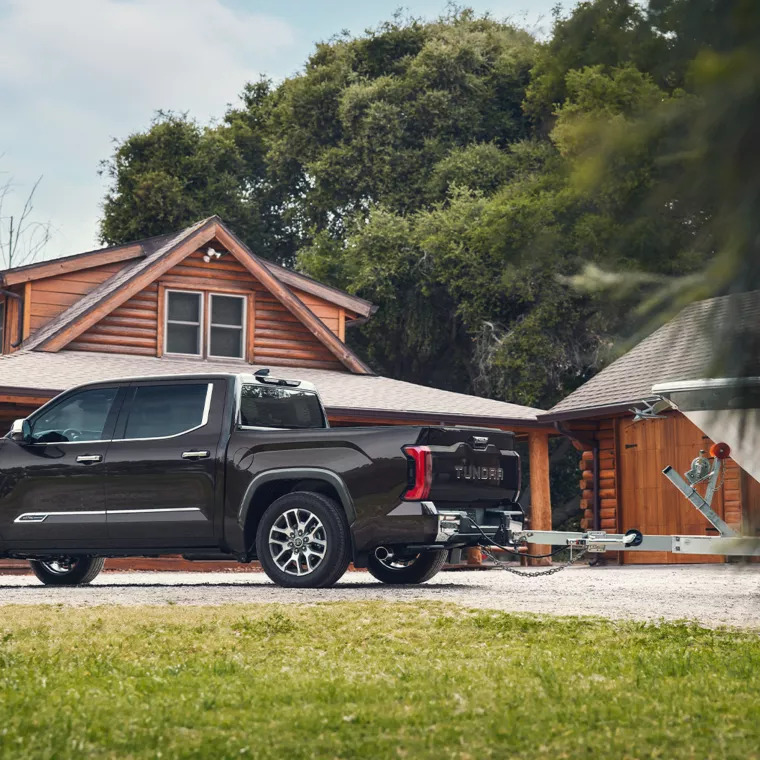 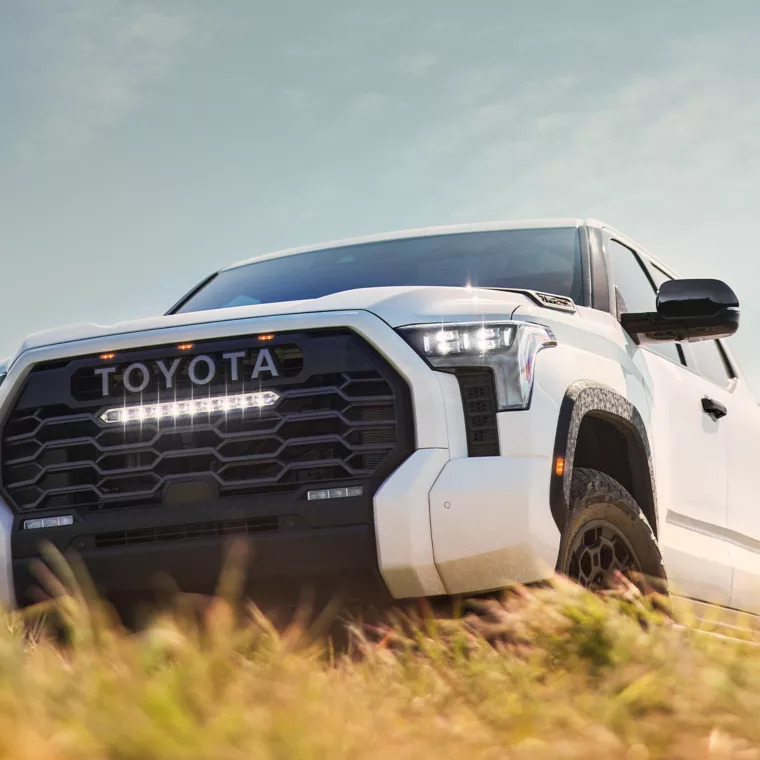 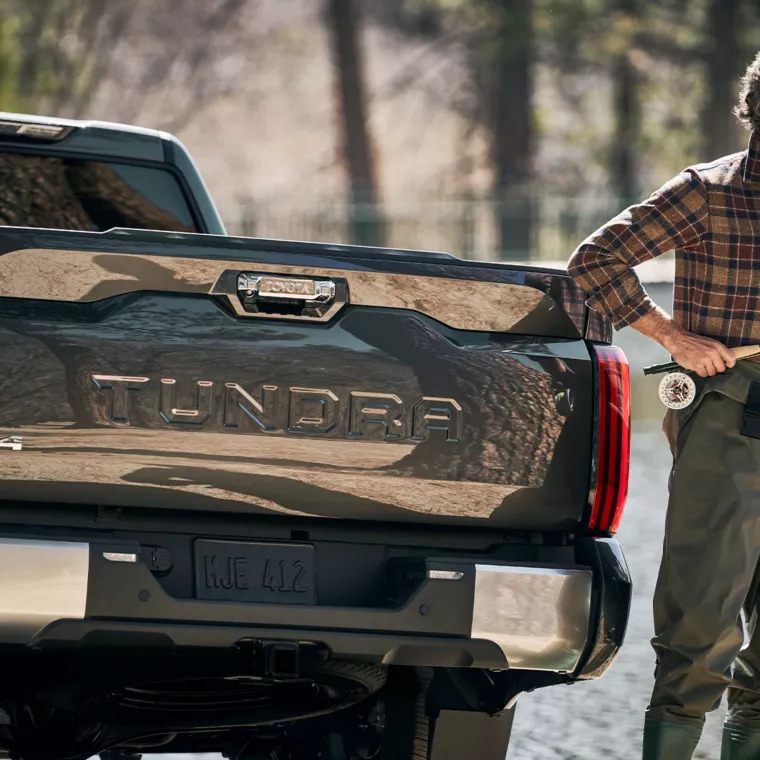 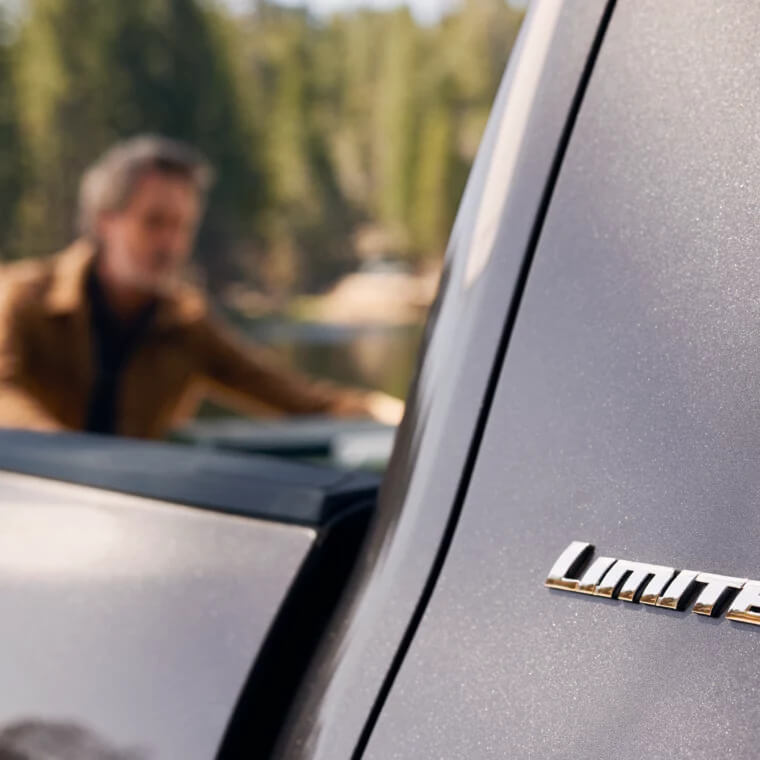 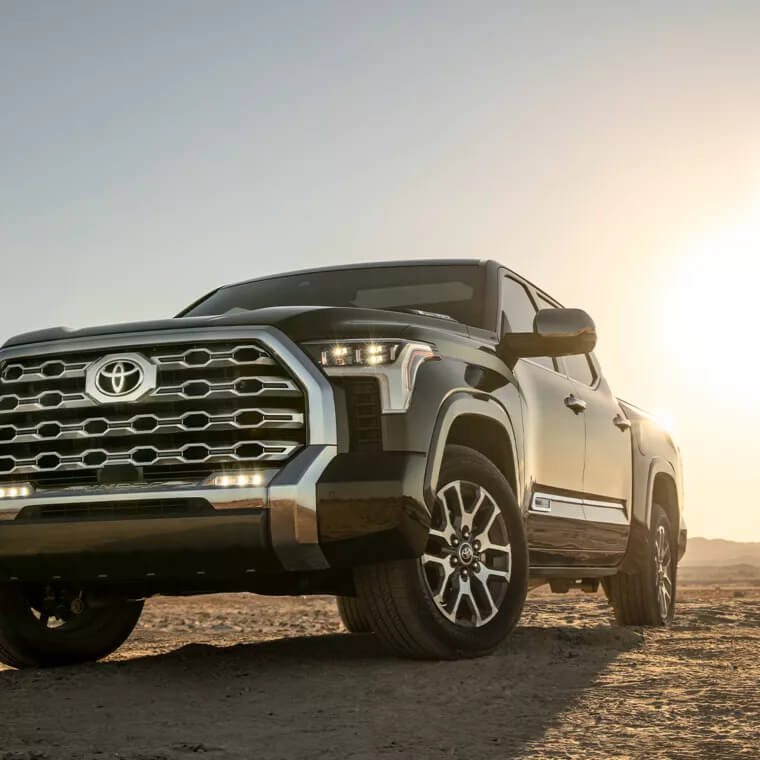 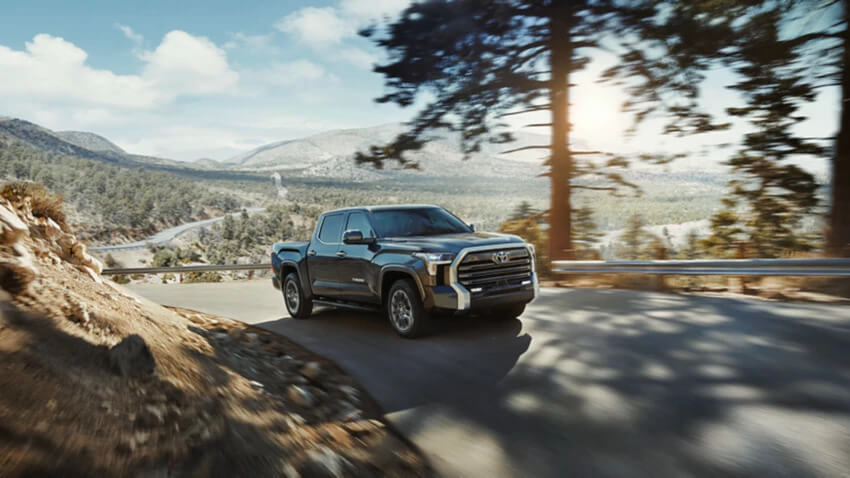 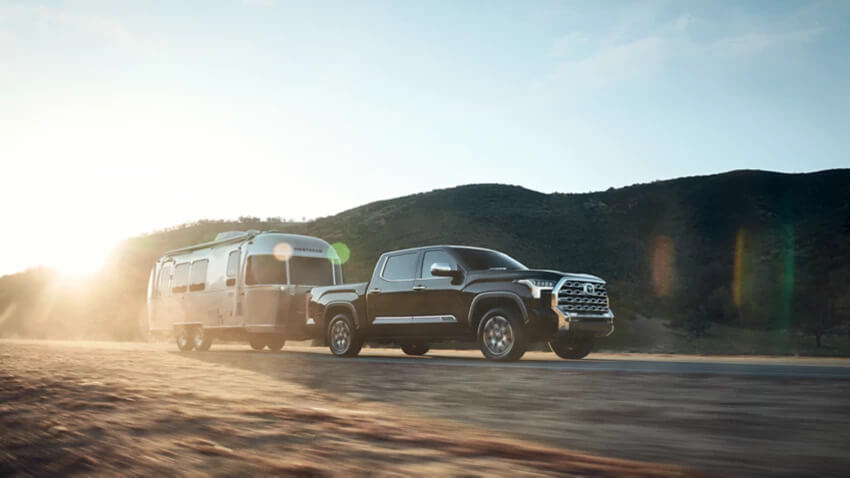 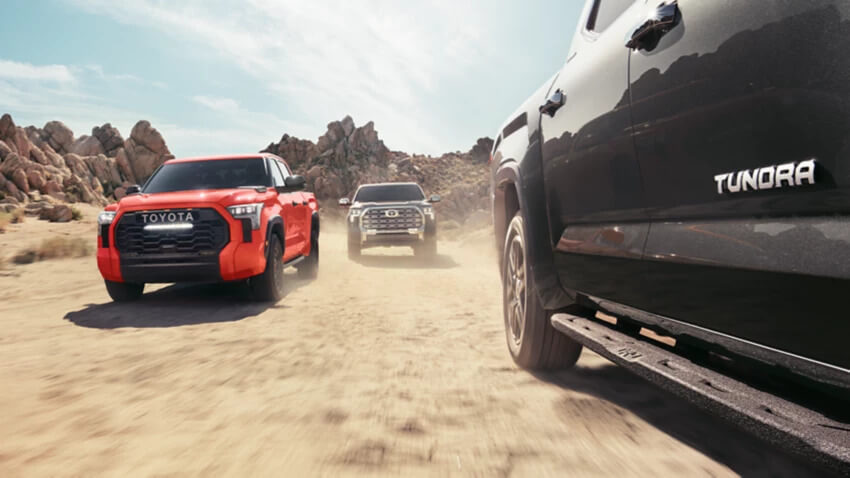 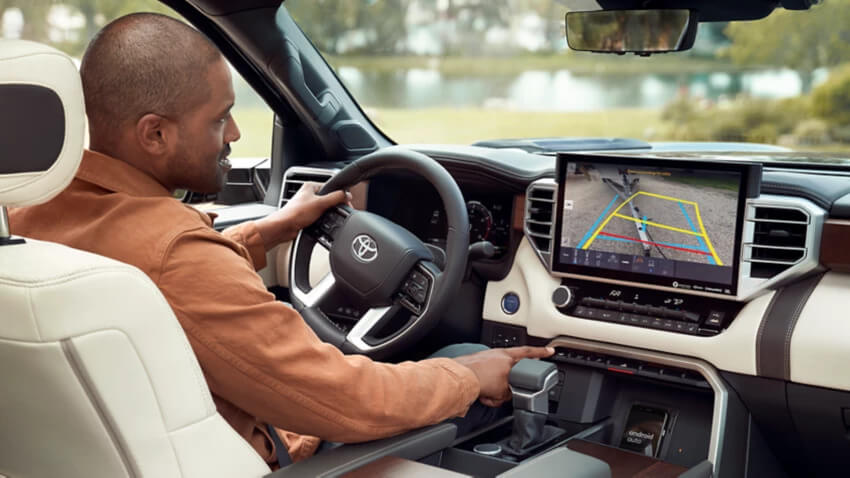 Using lightweight, high-strength materials to keep weight down and a new multi-link rear suspension, Tundra moves down the road with rugged agility.152

Bring on the rocks, mud and sand. With available Multi-Terrain Select (MTS) and Crawl Control (CRAWL)154 technology, Tundra doesn’t let obstacles get in the way of a good time.149

Using sensors and cameras, Tundra’s driver assistance technology helps you easily connect your trailer and keeps it in a straight line as you back up. 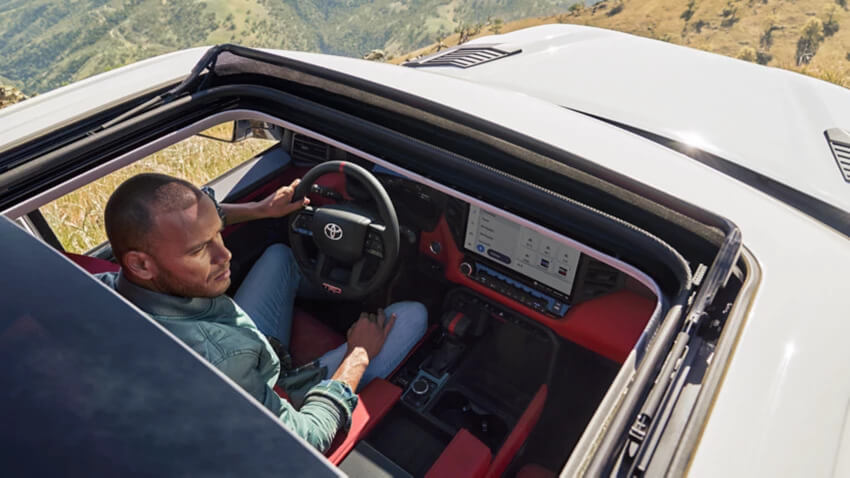 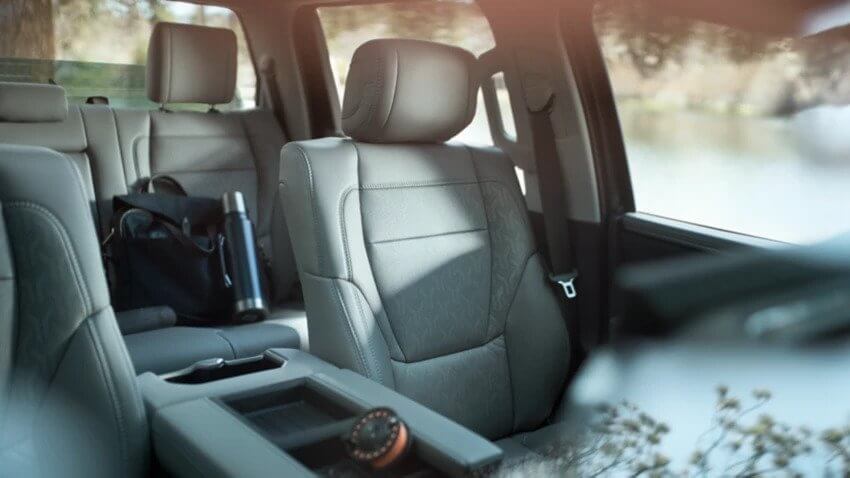 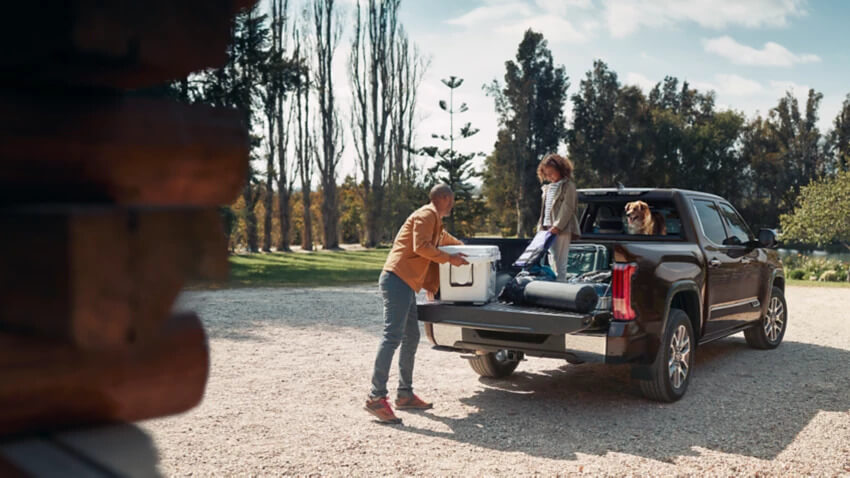 With just the push of a button, Tundra’s available panoramic moonroof opens up to give you a glimpse of the big, wide world waiting to be explored.

A signature Toyota feature. Tundra’s rear glass raises and fully lowers with the push of a button, making it easier to grab your gear—or give your four-legged friend a better view.144 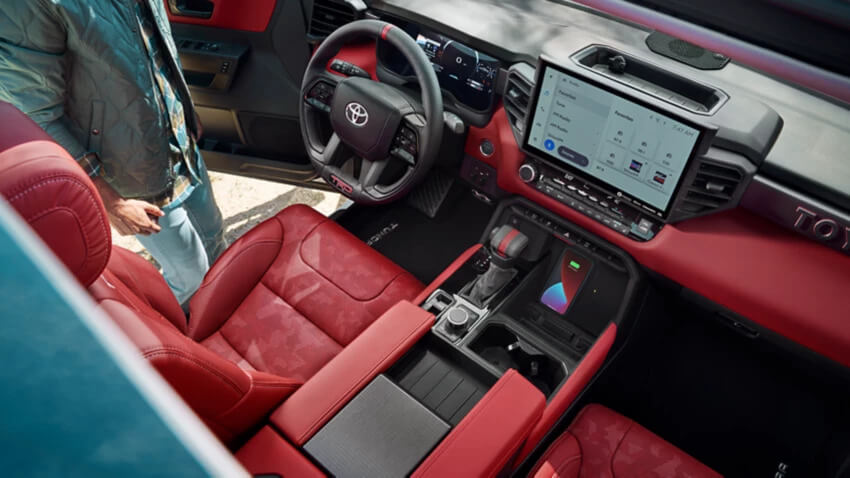 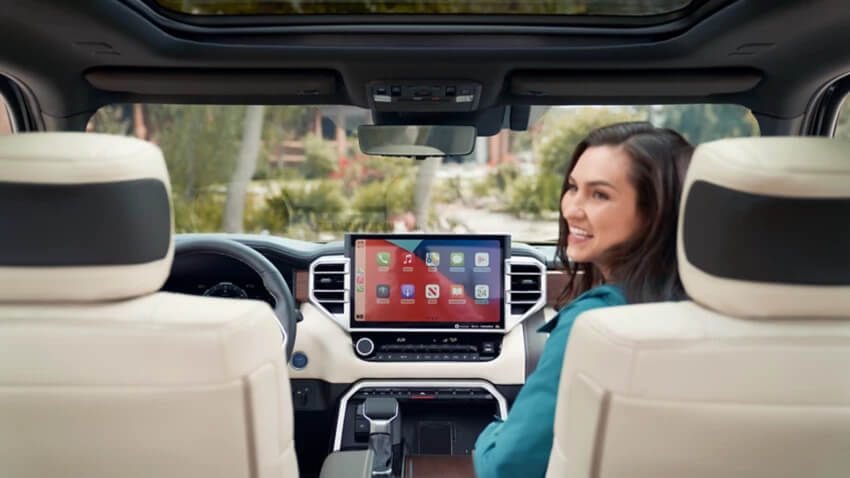 A big upgrade. With one of the largest multimedia touchscreens available in its segment,157 Tundra lets you see, control and connect to your tech like never before.

Wireless Apple CarPlay®158 lets you safely use your favorite iPhone®151 apps as you drive. Or you can wirelessly connect your Android™96 smartphone to enjoy Android Auto™159 compatibility on your next adventure.148

The all-new Tundra TRD Pro is built for the great outdoors. Featuring 18-in. BBS®150 forged alloy wheels wrapped in all-terrain tires, an off-road suspension with FOX®142 shocks, and a TRD aluminum skid plate—this truck fears no trail. And with Multi-Terrain Select (MTS) and Crawl Control (CRAWL)154 standard, TRD Pro doesn't let obstacles get in the way of a good time. Take hold of the reins and get ready for unforgettable adventures.137149

When you see those six letters underlined by an integrated LED light bar on the grille, it reminds everyone that Toyota is still king of the off-road.149

Off-road performance. On-road stability. Whether you're rock-crawling, ripping through the desert, or driving home from a family road trip, Tundra TRD Pro's suspension features rugged FOX® shocks142 that are designed to deliver the optimal ride for any terrain.149 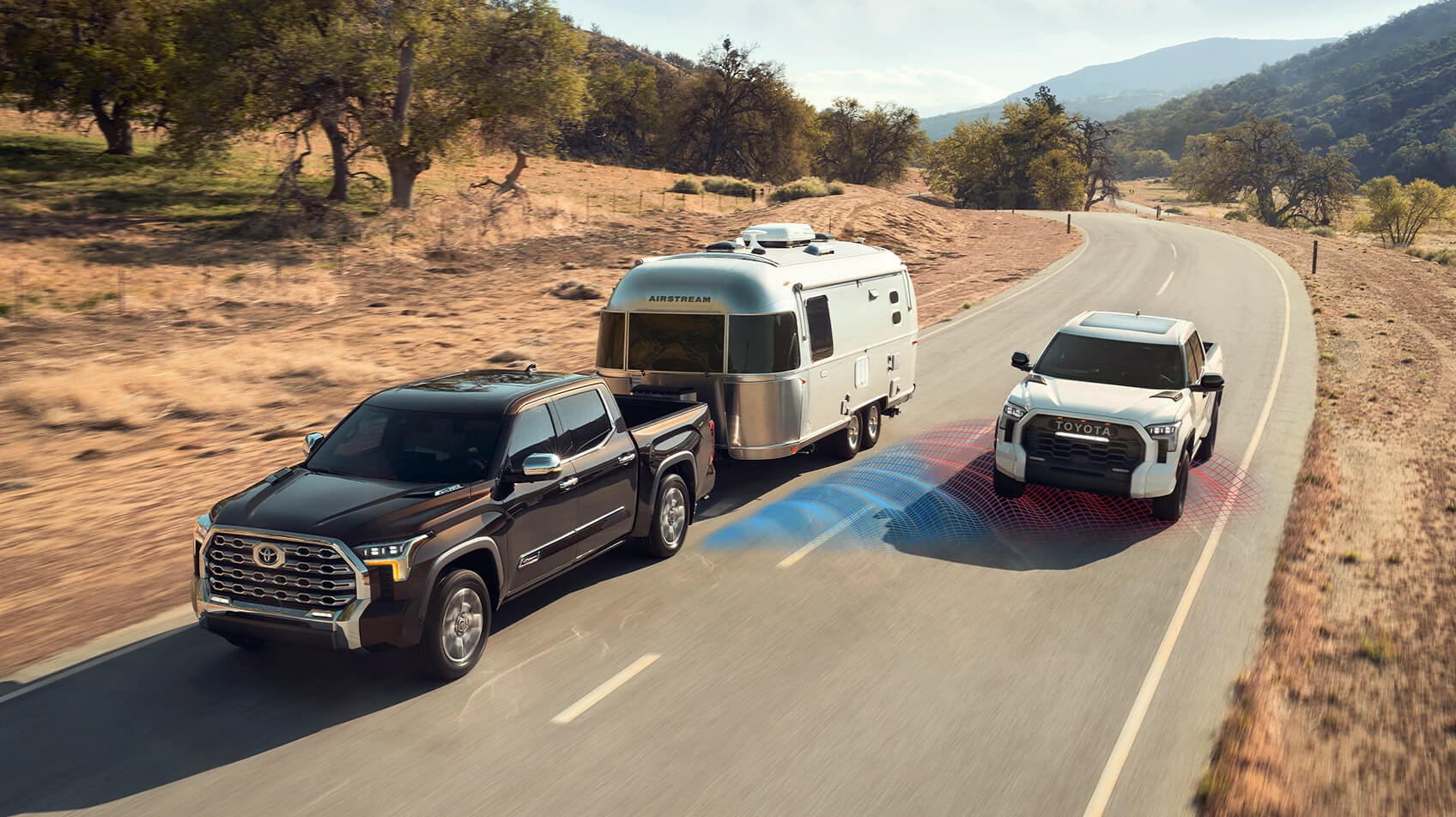 Tundra’s Blind Spot Monitor (BSM)146 is designed to warn you when a vehicle in the next lane enters your blind spot on either side of the vehicle. When you engage Toyota’s Integrated Trailer Brake Controller (ITBC),156 the system automatically senses there’s a trailer connected, estimates its length and activates Trailer Merge Warning—all without any input from the driver. And when you’re reversing out of a tight spot, Rear Cross-Traffic Alert (RCTA)147 helps detect vehicles approaching from either side, warning you with side mirror indicators and a warning tone. Altogether, Tundra’s advanced safety technologies bring added peace of mind to every journey. Simulation shown.152

Toughness Is in Our DNA 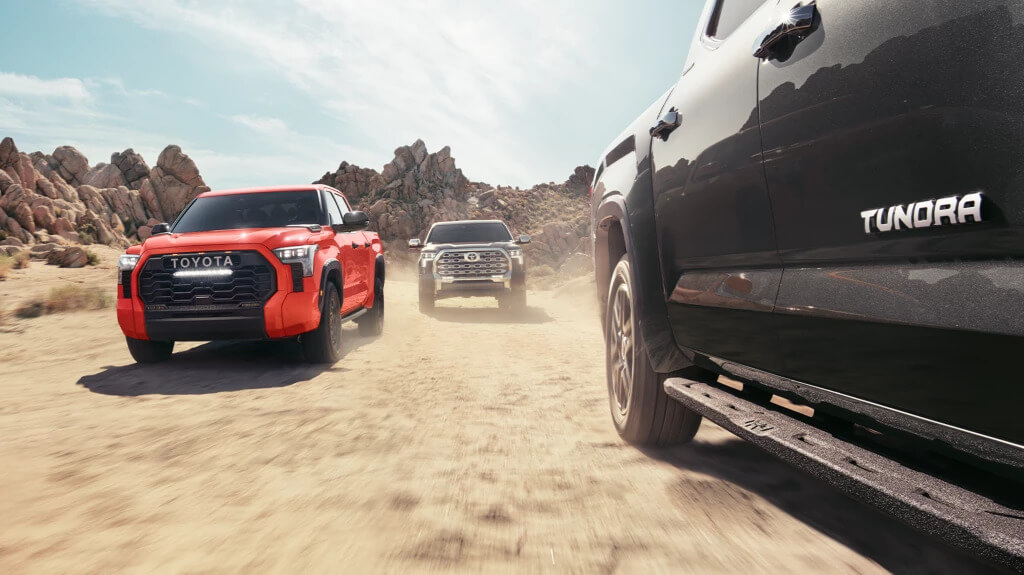 The next generation is here. Uncompromising power. Terrain-tackling capability. Advanced towing technologies.152 The all-new Tundra is a force to be reckoned with.

This ‘90s-era Baja truck was built for Ivan “Ironman” Stewart, the most decorated off-road racer in history. Carbon-fiber and Kevlar® 153 body. Hand-built aluminum chassis. Forty-eight inches of combined travel suspension between the front and rear. And the winner of four Baja 500 races and one Baja 1000. This legendary off-road icon is a daredevil in every detail.

According to legend, a dealer in Wisconsin put a removable fiberglass canopy on a Hilux, and the 4Runner was born. Toyota took note and started to put them into production in 1984. “Four-wheel drive” and “off-road runner” combined to become “4Runner,” which for the first time married the rugged mechanics of a pickup with the creature comforts of a passenger vehicle. By 1987, the 4Runner had switched to independent front suspension and introduced an all-new V6 engine for the first time. And the rest is history.

In 2012, a Toyota Tundra successfully towed the space shuttle Endeavour—at a combined weight of nearly 300,000 pounds—across a bridge spanning the nation’s busiest freeway. After finishing its tough 12-mile journey, Tundra safely brought Endeavour to its new home at the California Space Center—proving its strength to the world. 155

The longest modified Land Cruiser ever made. A legendary 3B diesel workhorse, the BJ45 Troopy was designed to carry 13 troops and their gear across almost any terrain. It’s also been known to moonlight as an ambulance in remote areas around the world. The gasoline variant, the FJ45 Troopy, improved the vehicle's universal appeal, making it famous around the globe.

Preceded by the iconic Land Cruiser 70 series, FJ75 follows a path right back to 1957 and is known for its legendary strength, rugged looks and utilitarian features. From the Bass Strait pipeline projects in Australia to the roughest rural, mining and construction sites around the world— FJ75 1991 is an uncompromising workhorse you can always count on.

MIDNIGHT BLACK METALLIC
Prices and colors may vary by model.